He ALSO has a GOOD day job: He is the Founder and Pastor of the baddest  Church in Tacoma, SureHouse!  Where you ALWAYS  FEEL BETTER WHEN YOU LEAVE THAN WHEN YOU ARRIVED! And that’s how it’s supposed to work, isn’t it! 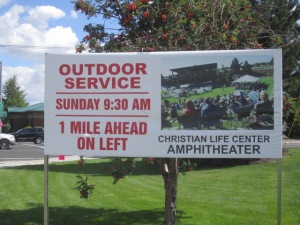 This way to the SureHouse Summertime SHOW! 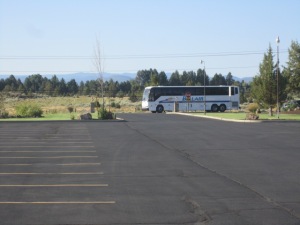 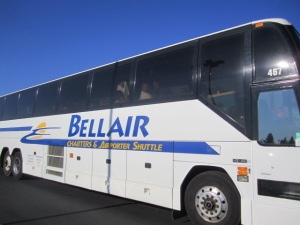 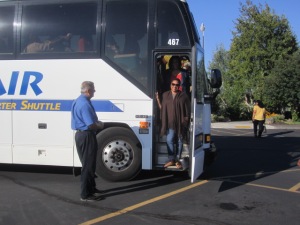 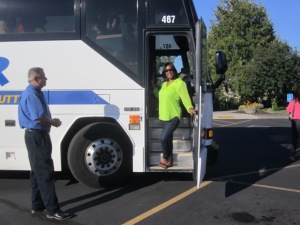 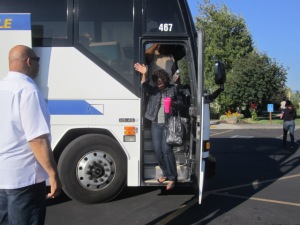 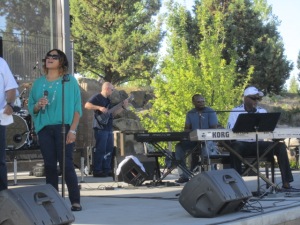 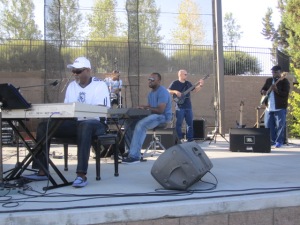 ALWAYS the HAPPIEST  Pastor EVER! 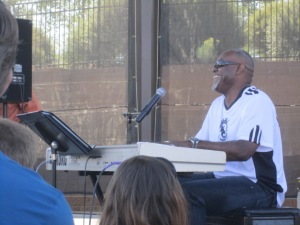 SureHouse bringin’ ‘em to their feet! 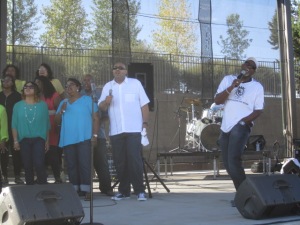 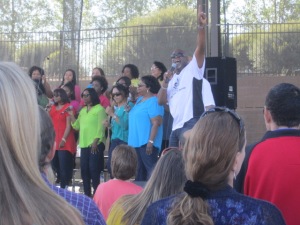 No one sittin’ down … EVER! 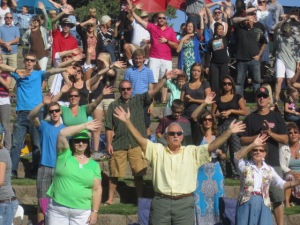 And then the Hospitality of a High Desert  BBQ!  “Thanks!” Christian Life Center.

If the Organic Community spent half as much time as it does pissin’, moanin’, whinin’, cryin’ and complainin’ about what the GMO boys and girls are doin’, and instead, spent that time on TELLING  its OWN STORY  and SELLING  an up-with-life  feeling, Organics would probably be further down the road than its current, and rather paltry and diminishing 4+/-% Market Share!

If time, energy and resources were spent, and FOCUSED, on MAKING  Organic Good Food the just-got-to-have, the go-to, the FIRST CHOICE, THE FASHION, and hitting the holy grail of COOL, the GMO/non-organic stuff would just simply disappear from a lack of consumer interest.

The ‘Law of Attraction’ states you move towards  that which you want to become, a message more compelling than moving away  from that which to avoid.

My concern, is that after 25 years, Organic Good Food is ONLY 4+/-% POPULAR.  THAT’S worse than Congress’ popularity!

Does the Organic Community need a change in its public appearances?  YES!

Consider this: In Europe, and in a lot of other Countries, GMOS are for the most part, banned, shunned, not-allowed or labeled, and Organics are STILL a niche player!

As I think about the future of Organic Good Food, the reason Organics only have a niche Market Share, is because the Organic Industry, as a whole, has been telling virtually the same old story  the entire time. The general public perceives the Organic Community, and its Spokespeople, to always seem to be against something, always angry, anti-this, anti-that, rigid ideologues, lecturing, holier-than-thou … never seem to just be HAPPY.

The Organic Community tends to have an arrogant, above-it-all, humorless, elitist, a stern dietician’s we-know-what’s-better-for-you stance.

Many in the Organic Industry have called or written me, saying a better narrative is needed. I couldn’t agree more.

Think about this. In 1996, there were more Organic Seeds than GMO seeds. NOW, the reverse is true. WHY?   Monsanto et al. simply told a more compelling  STORY to Farmers, to Regulatory Agencies, to Politicians, to Reporters, News Agencies, Retailers and Mainstream Consumers. They spent their time, energies and resources talking about THEMSELVES and SELLING!

The Organic Community is always fighting something, forcing its customers to be involved in a movement, to be issues oriented, to have to ‘take sides’, to consider their food purchase to be a political statement, when all the average consumer wants is to simply make a choice that reflects to them a positive, happy, trouble-free lifestyle in this World of trouble all ‘round. The general public feels overwhelmed and is tired of being lectured and warned of yet another imminent crisis.

Organics should just let shoppers be happy BUYERS.  No strings attached.  Don’t involve them in politics or the issue of the moment.  Just ask them to SPEND their money on Organic Good Food for their own GOOD HEALTH & HAPPINESS … and nothing else. Just let them ENJOY  their Organic Good Food Choices and the JOY  they bring to life!

The Organic ‘Choir’ is so convinced and so enamored with the ‘purity’ of its own product, that SELLING  it seems to be almost beneath them. But SELLING  shouldn’t be, as our very lives depend upon a dramatic GROWTH and rapid EXPANSION of Market Share of wholesome, healthful, life-giving Organic Good FOOD.

Sometimes it seems that the only purpose for Organics is that it’s grown ‘organically’, that it protects the environment. The Organic Industry always tries to tell what Organics don’t do, rather than SELLING what they WILL DO … TO, and FOR, THE CONSUMER! The eater can’t see that the purchase of an Organic Celery cleans a river. But, upon one sip of BAINBRIDGE DISTILLER’S Organic Battle Point Whiskey, they’ll KNOW what GOOD Organics can DO FOR THEM! Oh, YEAH!

So, get off your tractors, shine your shoes, get dressed, comb your hair and become relevant.

The Organic Industry has to get over itself, get its hands out of the good soil and its head out of the clouds and take some lessons from those companies that KNOW HOW TO SELL LOTS OF STUFF: Budweiser®, Apple®, Coke®.  There is nothing inherently wrong with SELLING. There is no dishonor in SELLING Organic Good Food, after all, Organic Good FOOD is the only TRUE FOOD left for us to thrive on, FOOD that’s GOOD for PEOPLE & PLANET.  So SELLING MORE OF IT to every Man, Woman and Child is an HONORABLE endeavor.

Put some FUN in The Organic Good Food STORY! FUN is hard to ignore. Show some CHEERINESS and HAPPINESS, ‘cause that’s where everyone WANTS to be, NOT over there in a harsh, limited little world with LESS  CHEER, LESS  HAPPINESS & LESS  FUN.

Organic activists write Manifestos! So did the Communists.

Where’s the picture of a FUN young couple cresting a wave in a Ski-Doo® with a bottle of WOLAVER’S® Organic Beer and a bag of LATE JULY® Organic Chips!

Organic Good Foods ARE the  HEALTHY HIGH! And when you start feeling better for more than four hours, call a friend.

Everyone wants to be over there on the happy side, the Capt’n Morgan® side, the MILLER® Lite side, and not over there with the angry nutritionists, the food police gang and ‘protesters’! The Organic Industry’s rather dour Story has handicapped its Market Share.

Another example of EFFECTIVE MARKETING, and this one is as old as the hills, but ever so relevant: In every blind taste-test, Pepsi® ALWAYS beats Coke®, but Coke® outsells Pepsi® by miles! Why? It’s ALL in the MARKETING, the SELLING, the IMAGE! So now, think about THIS: Organic Good Food ALWAYS TASTES BETTER than its synthesized, chemicalized, laboratory concocted non-organic imitator. So, why only the 4+/-% Market Share? Wrong image!

Even now, in 2014, because of Organics’ dreary image, counter-culture and life-style of denial, I have to open the LIVE Change Your Food – Change Your Life! Shows with a take-away: “I don’t live in a commune, I don’t wear tie-dye, I can’t spell Birkenstock and I don’t eat granola!” I have to assure them, life’s to LIVE! And the audience goes, “Whew! We’re safe with this guy!’

After all, Organic Good Food is the LIFE  of the party!

The KEELY CLARK See and Be Seen It’s Your Beat! Tour.

I’m deluged with e-mail messages from food activists demanding that I “Tell Congress to …”, ”Stop Congress from …”, “Sign THIS Petition”, “‘Just LABEL It!’”, “We need your money to …“, “OPPOSE … “, “Join our struggle AGAINST … “, Tell The FDA …”, “Tell the USDA …”, “Call my Senator” and on and on and on, never-ending. But all I ever get from Kellogg’s®, McDonalds, Coke® and Budweiser® is “The Start of Possible”, “i’m lovin’ it®”, “open happiness™”, “Great Times are Waiting: GRAB SOME BUDS”, “Everything POPS with PRINGLES™” and “LIVE MÁS™”. They never ask me to do anything other than BUY their stuff … and with a smile!

Budweiser® doesn’t show you their hops.  They just take you to somewhere they know you just kinda want to be.  Organics INSIST on proving up the value of its hops via PowerPoint, but then never ends up taking anyone anywhere.

Apple® makes people line up around the block for something they don’t really  need and the Organic Industry can’t even get enough people to buy enough Organic Carrots to actually make a healthful difference in their lives!

Organic family feuds  distract from Market Growth. Boycotts, recriminations, rock throwing and name calling CONFUSES the consumer and limits growth. If The Organic Consumers Association, Cornucopia Institute, The Organic Trade Association, Food & Water Watch, The Center for Food Safety, Food Democracy Now, Institute for Responsible Technology and other KEY players were ever to all get together, decide upon a message and get on the same page, Organics would be propelled to its rightful place in the market – THE MAJORITY SHARE!

Create the FUSION of FOOD, FUN and FASHION. SHOW, TELL and SELL  what GOOD LIVIN’ looks like, sounds like, tastes and feels. 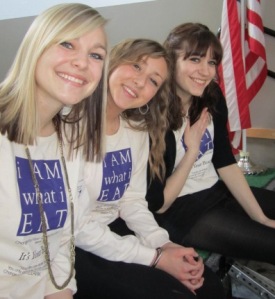 Grocery Stores have Cheese Specialists, Meat Specialists, Seafood Specialists and Wine Stewards. They even have ‘a produce guy’. WHERE’S the Organic Expert?

TELL & SELL  what simply makes the consumer FEEL GOOD when making the purchase, ‘cause I KNOW the eater is going to feel REAL GOOD  after ENJOYING  their Organic Good Food! 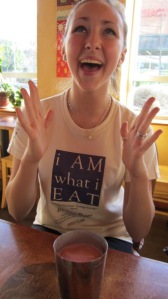 And way back in 1944, songwriter Johnny Mercer got it RIGHT in the song

“You’ve got to accentuate the positive

Don’t mess with Mister In Between

You’ve got to spread joy up to the maximum

Bring gloom down to the minimum

Have faith or pandemonium

Liable to walk upon the scene

Jonah in the whale, Noah in the ark

What did they do

Just when everything looked so dark

Man, they said we better

No, do not mess with Mister In-Between

Do you hear me, hmm?

Oh, listen to me and-a you will hear

About the elininatin’ of the negative

And the accent on the positive

And gather ’round me if you’re willin’

And sit tight while I start reviewin’

The attitude of doin’ right

You’ve got to accentuate the positive

Don’t mess with Mister In Between”

And you can take my analysis TO THE BANK, as here’s PROOF that I AM your POT o’ GOLD at the end of the Rainbow! Here it is, right over my Office!